Despite all the “good food”/”bad food” hype you hear, healthful eating isn’t really so confusingly complicated. Stick to a diet based on whole foods (ideally organic), including lots of fresh produce, a minimum of industrially processed food and sugars, and a good amount of variety, and you’ll do fine.

Or, as Michael Pollan famously put it, “Eat food. Not too much. Mostly plants.”

The problems largely arise when we venture into the area of commercially manufactured food. Those adjectives matter, for strictly speaking, most all food is “processed” in some way before we eat it – through cooking, say, or even just mixing ingredients together. Commercial manufacture takes it to a whole different level, often using ingredients that would otherwise never be found in your kitchen (and that your body has no need of). 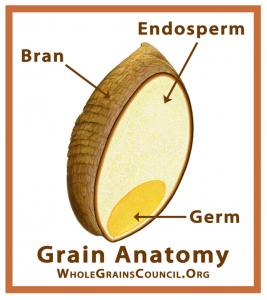 It also tends to beat the nutritional life out of its food-sourced ingredients, which is one reason for the recent emphasis on whole grains. The refining process strips nutrients and fiber from the grain. Whole grains and whole grain flours keep more of the good stuff by using all layers of a kernel: bran, endosperm and germ.

But just because something is “whole grain” doesn’t necessarily mean it’s healthful – a point pounded home by a recently released Harvard School of Public Health study. The gist of it? “Current standards for classifying foods as ‘whole grain’ are inconsistent and, in some cases, misleading….”

They found that grain products with the Whole Grain Stamp, one of the most widely-used front-of-package symbols, were higher in fiber and lower in trans fats, but also contained significantly more sugar and calories compared to products without the Stamp. The three USDA recommended criteria also had mixed performance for identifying healthier grain products.

Of course. The first, second and fourth standards in particular allow for a lot of wiggle room – which is exactly how you get things like the magically health-haloed whole grain Lucky Charms and other sugarific cereals. 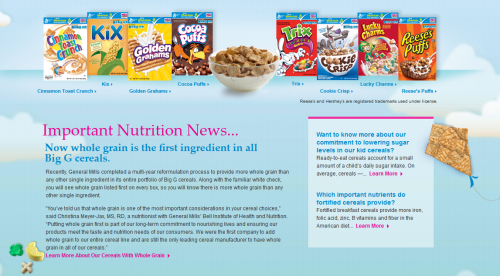 Not mentioned on that General Mills web page is the fact that “sugar” is the second most abundant ingredient in every product shown except Kix, in which it’s the third ingredient. (All include multiple sugars, as well.) They don’t have much to say about the artificial colors, flavors, preservatives and other additives either; nor the presence of GMOs in those products made with corn.

But, hey, they’re whole grain, so they must be good, right?

Of course, we’ve talked about this kind of thing before, and the moral of the story remains the same:

Ignore the front of the package; read the ingredients and nutrition info instead. And if you decide to consume the product, do in moderation.

And in case you’re wondering, the Harvard study found that the AHA guidelines gave the best indication of healthfulness:

Products meeting this ratio were higher in fiber and lower in trans fats, sugar, and sodium, without higher calories than products that did not meet the ratio.