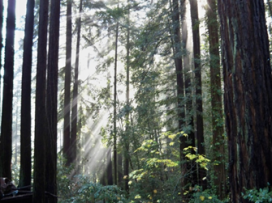 Have you ever wondered why it can feel so good to be among the fresh air and greenery of the great outdoors? According to a new study, there seems to be a distinctive link between trees and human health. And a small beetle showed the way.

Inadvertently brought to North America from its native Asia around the turn of the century, the emerald ash borer has devastated the ash tree population of the upper Midwest in particular. All 22 species of ash are vulnerable to it, and it almost always ends up killing the trees. More than 100 million have thus far.

How might this loss affect us? Researchers looked at data from 15 states across a 17 year span, including several years before the borer was introduced. What they found was an increase in human deaths from cardiovascular and lower-tract respiratory diseases. The greater the tree loss, the greater the increase in mortality. Said lead author Geoffrey Donovan,

“There’s a natural tendency to see our findings and conclude that, surely, the higher mortality rates are because of some confounding variable, like income or education, and not the loss of trees…. But we saw the same pattern repeated over and over in counties with very different demographic makeups.”

The findings were published in the American Journal of Preventive Medicine.

And they follow numerous other studies that likewise demonstrated a strong relationship between nature and human health. Among the earlier research mentioned in The Atlantic’s coverage of the new study: a 2010 paper that

looked at the presence of parks and forests in the vicinity of people’s homes and their ability to act as a “buffer” against stress. [Its authors found] that the presence of “green space” was more closely related to physical – in terms of minor complaints and perceived general health – than mental well-being.

Other research has shown that obesity is less of a problem for children in greener neighborhoods, and those diagnosed with ADD/ADHD show marked symptom improvement after spending time in natural settings. College students with dorms that look out on nature tend to score higher on attention tests. Girls who live in homes with greener views show enhanced concentration and self-discipline, academic improvement and more thoughtful decision-making.

Here are some of the other health benefits that have been shown to come with the (green) territory:

Of course, trees are great for the health of our environment, as well. (Let canopy.org count the ways…)

Maybe that new ash tree study is just the kind of wake-up call we need to accept the connectedness of all life. The call to environmental stewardship is not just a noble one. It’s a call we must answer for the sake of our own health and well-being.