Why Does Poor Oral Health Remain Such a Problem? 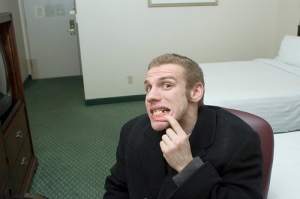 Every so often, a new story comes out about the American struggle with oral health. Not long ago, for instance, we heard about how 20% of Americans have untreated decay and most have some history of cavity repair: 40% of children, 52% of teens and 75% of adults. Other studies say that by the age of 65, as many as 90% of adult Americans have experienced decay in their permanent teeth.

Why is it such an ongoing problem?

For one, there’s the standard American diet, which is chock full of sugars even before factoring in the sodas, juices and other sweet beverages we’ve come to drink more of. These, along with refined grains and other processed carbs, feed the pathogenic (disease-causing) microbes involved in oral disease. Sugar has other negative health effects, too, and makes us more susceptible to illnesses of all kinds.

Add to this lifestyle factors such as limited physical activity, high stress, poor and insufficient sleep, high drug use (including prescription drugs, alcohol and tobacco) and the like: all these factors similarly weaken the body’s innate self-regulating abilities. We become prone to illness – or at least suboptimal health.

Then there’s the matter of lack of knowledge about dental health and hygiene – a point made quite vividly by survey findings released by the American Dental Association last week. The headline on their press release?

The “quiz” was a series of true/false questions answered by nearly 1500 adults. Here’s what the ADA found – and the correct answers:

Taking good care of your health – dental and systemic alike – means understanding how your body works. That’s why you may find your dentist or hygienist always explaining and teaching at your appointments – teaching that, unfortunately, some patients tune out for various reasons. But the teaching does matter, so we keep doing it. It’s central to our work. As I wrote before,

I can’t speak for all dentists, of course, but as a dentist, it’s important to me that you understand what we’re doing and why we’re doing it, as well as what you can do to gain and sustain more optimal oral health in general. After all, dentists are doctors, too – physicians whose specialty involves the teeth and oral cavity. You know how the word “doctor” came about? The English word comes from the Latin word docere, which means “to show, teach or cause to know.”

Teaching is part of our job.

One response to “Why Does Poor Oral Health Remain Such a Problem?”